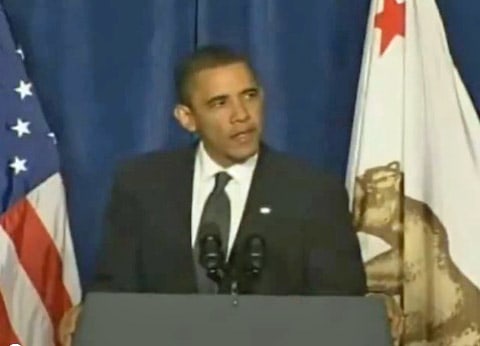 Obama was speaking at a fundraiser for U.S. Sen. Barbara Boxer at the Fairmont Hotel.

(Video, AFTER THE JUMP…) 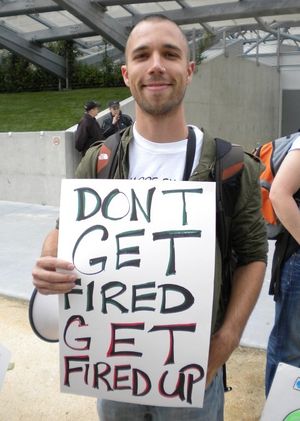 Williams said he yelled at Obama because the latest plans for Don’t Ask, Don’t Tell repeal are inadequate.

“The solution now being discussed to repeal Don’t Ask, Don’t Tell is an empty half measure and, even if passed, it will allow discharges of lesbian and gay service members to continue indefinitely,” Williams said in an interview.

“(The current plan) has shifted responsibility off of Congress’ back and onto the president, the secretary of defense and the chairman of the Joint Chiefs of Staff,” he said. “This bill is Congress saying: ‘Whenever you all decide you’re ready to end Don’t Ask, Don’t Tell, we’re cool with it. You don’t have to check in with us again.'”

“It is a repeal of the law,” Williams said, “but the policy and practice (of DADT) doesn’t have to be phased out until (Defense Secretary) Robert Gates decides he’s ready to do it. There’s nothing binding, there’s no timeline, and it will not end the discharge of lesbian and gay service members now.”

Williams said he believes the plan unfolded the way it has because Gates is “the real holdup … the only real opposition.”

Williams was cited for disturbing the peace and then released.

“It was the first time I’ve done something like that by myself,” he said. “I was close enough to see Obama’s face. I worked so hard on his campaign and I still believe in him and I support him and I wish I didn’t have to have that exchange with him and I saw the anger on his face when I started speaking, but I’m angry too, and I can’t be silent.”

Obama responded to the disruption.

“It’s good to see you again,” the president said to Williams. “I have to say, you know, I saw this guy down in L.A. at a Barbara Boxer event about a month and a half ago and I would — two points I want to make: Number one, he should — I hate to say this — but he really should, like, buy a ticket to — if he wants to demonstrate — buy a ticket to a guy who doesn’t support his point of view, and then you can yell as much as you want there. The other point is, maybe he didn’t read the newspapers because we are working with Congress as we speak to roll back Don’t Ask, Don’t Tell. I actually think he does read the newspapers because he wasn’t as — his heart didn’t seem in it. He said, ‘Do it (repeal DADT) faster.’ It’s like, c’mon, man, I’m dealing, I’m dealing with Congress here. It takes a little bit of time.” 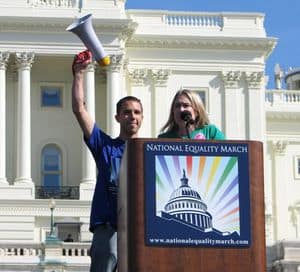 In a press statement earlier in the day, GetEQUAL co-founder Robin McGehee set the stage for Williams’ heckling.

“After a year and a half of mostly inaction, the White House has offered our community a compromise that is movement forward on repeal, but unfortunately not nearly enough for those service members — some who stood handcuffed with us and faced arrest beside us at the White House — living under the shadow of this outdated, immoral law,” she said. “Together, our collective voice has moved the White House from a place of absence to involvement. However, we didn’t invest ourselves to this cause, nor spend nights under arrest in a jail cell for a compromise. President Obama, we won’t stop until you stop the immoral firing of our brothers and sisters in the military so that their integrity is restored, their jobs are secured and their families are recognized.”

Leading Don’t Ask, Don’t Tell activist Lt. Dan Choi, who has been arrested twice recently for handcuffing himself to the White House fence, also is dissatisfied with the latest plans.

“My question still remains, and I’ve yet to find anyone who signed off on yesterday’s compromise able to give me a direct answer to, ‘When exactly will the discharges stop?'” Choi said May 25. “Until the President signs the papers that fully and immediately end the firing of patriotic, gay and lesbian service members, then there is no cause for celebration and no reason to trumpet mission accomplished for a job not yet done.”

“We’ve heard a lot of talk about how this compromise can work politically, but on the day this passes Congress, no one has been able to explain how this will have any impact at all on those of us serving in uniform,” Choi said. “Unfortunately, we have been handed an imperfect, 11th hour compromise.”

In a May 25 analysis piece, Advocate reporter Kerry Eleveld, who is covering the developments closely, seemed to affirm the activists’ concerns. She said the “compromise” plan facing congressional votes this week would not end DADT until “some indefinite point in the future.”

DADT would continue until a Department of Defense study is completed in December and until Gates, Obama and Joint Chiefs of Staff Chairman Michael Mullen “certify that repeal can proceed,” Eleveld said.

Watch Obama get heckled, AFTER THE JUMP…