Americablog points out that one of the elite scientific minds appointed to the panel to help BP clean up the oil spill is Jonathan Katz, a self-proclaimed “proud homophobe” who blamed gays for the deaths of innocent people who contracted AIDS and wrote this in an article published on his website: 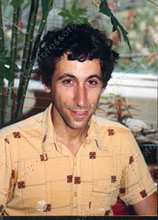 “Unfortunately, the victims are not only those whose reckless behavior brought death on themselves. There are many completely innocent victims, too: hemophiliacs (a substantial fraction died as a result of contaminated clotting factor), recipients of contaminated transfusions, and their spouses and children, for AIDS can be transmitted heterosexually (in America, only infrequently) and congenitally. The icy road was lined with unsuspecting innocents, who never chose to ride a motorcycle. Guilt for their deaths is on the hands of the homosexuals and intravenous drug abusers who poisoned the blood supply. These people died so the sodomites could feel good about themselves.”

More at Americablog, which has also posted a petition to have Katz fired.

Previous Post: « Christina Aguilera: ‘I Have Absolutely Nothing Against Lady Gaga’
Next Post: Edie Falco Does Not Butter the Lesbian Side of Her Toast »