UPDATE: And, for the first time, with sound: 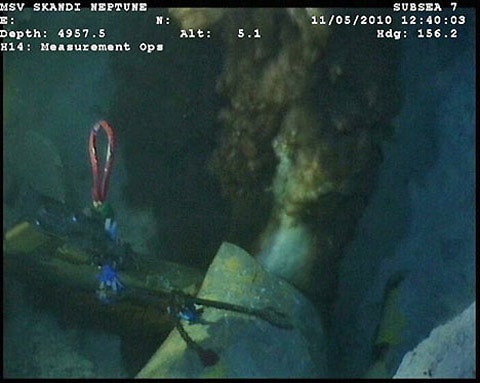 Here's the first image released to the public by BP of the massive oil leak in the Gulf of Mexico which is unleashing 210,000 gallons of oil into the Gulf each day. The corporation released the photo following pressure from the government, private citizens, and media.

It is thought that four million gallons of oil have already been unleashed.

The latest: "Bad wiring and a leak in what's supposed to be a 'blowout preventer.' Sealing problems that may have allowed a methane eruption. Even a dead battery, of all things.New disclosures Wednesday revealed a complex cascade of deep-sea equipment failures and procedural problems in the oil rig explosion and massive spill that is still fouling the waters of the Gulf of Mexico and threatening industries and wildlife near the coast and on shore."

Of the video, Deepwater Horizon writes: "Oil and gas stream from the riser of the Deepwater Horizon well May 11, 2010. This video is from the larger of two existing leaks on the riser. This leak is located approximately 460 feet from the top of the blowout preventer and rests on the sea floor at a depth of about 5,000 feet. "