“Stories from the Frontlines: Letters to President Barack Obama” was launched to underscore the urgent need for congressional action and presidential leadership in the fight to repeal “Don’t Ask, Don’t Tell” (DADT). With the House and Senate votes, we’re bringing the series to a close – for now. Even with the recent votes, it is important for all gay and lesbian, active-duty service members, including the reserves and the national guard, to know they’re at risk. They must continue to serve in silence under the ‘Don’t Ask, Don’t Tell’ law that remains on the books. Congress and the Pentagon need to stay on track to get repeal finalized, hopefully no later than first quarter 2011.

The final letter in this series was written by a World War II soldier to another on the occasion of their anniversary. It is a love letter. It was published in September 1961 by ONE Magazine – an early gay magazine based out of Los Angeles. In 2000, Bob Connelly — an adjunct professor of LGBT studies at American University –- found a copy of the letter in the Library of Congress. He brought the letter to the attention of SLDN last month. We sincerely thank Mr. Connelly for his research and the ONE National Gay & Lesbian Archives for granting permission for the letter to be republished in this series.”

For the past month, we have sent you personal letters from those harmed by “Don’t Ask, Don’t Tell.” With the votes in the House and the Senate Armed Services Committee, we are bringing our series to a close. The final letter we are sharing with you was written by a World War II soldier to another service member. It is a love letter penned on the occasion of their anniversary.

The letter, which follows below, was published in September 1961 by ONE Magazine – an early gay magazine based out of Los Angeles. In 2000, Bob Connelly, an adjunct professor of LGBT studies at American University, found a copy of the letter in the Library of Congress. He brought the letter to the attention of Servicemembers Legal Defense Network last month.

We sincerely thank Mr. Connelly for his research and the ONE National Gay & Lesbian Archives for granting permission for the letter to be republished.

Please accept this letter on the behalf of all lesbian, gay, bisexual and transgender service members on active-duty, in the reserve and in the National Guard; those who have been discharged; and those who didn’t enlist because of the discriminatory law now being dismantled.

THE LETTER AS PUBLISHED BY ONE Magazine: 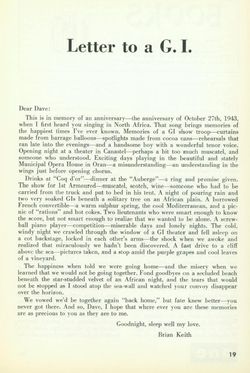 This is in memory of an anniversary – the anniversary of October 27th, 1943, when I first heard you singing in North Africa. That song brings memories of the happiest times I’ve ever known. Memories of a GI show troop – curtains made from barrage balloons – spotlights made from cocoa cans – rehearsals that ran late into the evenings – and a handsome boy with a wonderful tenor voice. Opening night at a theatre in Canastel – perhaps a bit too much muscatel, and someone who understood. Exciting days playing in the beautiful and stately Municipal Opera House in Oran – a misunderstanding – an understanding in the wings just before opening chorus.

Drinks at “Coq d’or” – dinner at the “Auberge” – a ring and promise given. The show 1st Armoured – muscatel, scotch, wine – someone who had to be carried from the truck and put to bed in his tent. A night of pouring rain and two very soaked GIs beneath a solitary tree on an African plain. A borrowed French convertible – a warm sulphur spring, the cool Mediterranean, and a picnic of “rations” and hot cokes. Two lieutenants who were smart enough to know the score, but not smart enough to realize that we wanted to be alone. A screwball piano player – competition – miserable days and lonely nights. The cold, windy night we crawled through the window of a GI theatre and fell asleep on a cot backstage, locked in each other’s arms – the shock when we awoke and realized that miraculously we hadn’t been discovered. A fast drive to a cliff above the sea – pictures taken, and a stop amid the purple grapes and cool leaves of a vineyard.

The happiness when told we were going home – and the misery when we learned that we would not be going together. Fond goodbyes on a secluded beach beneath the star-studded velvet of an African night, and the tears that would not be stopped as I stood atop the sea-wall and watched your convoy disappear over the horizon.

We vowed we’d be together again “back home,” but fate knew better – you never got there. And so, Dave, I hope that where ever you are these memories are as precious to you as they are to me.

(Reprinted with permission of ONE National Gay & Lesbian Archives, www.onearchives.org, ONE Magazine, September 1961)