The British gay rights group Stonewall has published an extensive study wherein they report that almost all gay men and women who seek asylum in the United Kingdom are returned to their home countries, even those who will most likely face incredibly harsh punishment, including death, due to their sexual orientation.

According to The Independent, the report highlights some unbelievable ignorance and homophobia:

The report, No Going Back, found that between 2005 and 2009 almost all cases involving people claiming asylum on the basis of their sexual orientation were refused by the Home Office. During the same period the general refusal rate for asylum-seekers in the UK was 76.5 per cent. 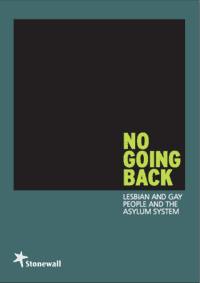 The report quotes one UKBA staff member admitting: "Someone from Jamaica claiming they're gay will just automatically be disbelieved." Another said "Colleagues have said that they don't know what questions to ask; we feel rude prying and embarrassed about asking these questions."

Many cases are turned down simply on the basis that someone fleeing a country where homosexuality is punishable by death or hard labour could simply "live discreetly" – in other words, go into hiding. UKBA staff admitted this was discriminatory.

UKBA staff also showed a lack of understanding and training, the report says. One case worker asked an asylum-seeker: "Why do you choose to be homosexual when you know it is illegal in your own country?"

Included in the report are several disconcerting quotes from asylum seekers:

“My mother said, ‘I wish you die of AIDS. Homosexuals die of AIDS. It was a mistake I had you as a child’ ” – Johnson, Ugandan asylum seeker

You can read the entire report on Stonewall's Website.

Previous Post: « Watch: Music Video For Robyn’s ‘Dancing On My Own’
Next Post: Watch: Lost: Every Shirtless Moment »