Here's a frightening graphic for you. In related news, Arnold Schwarzenegger reversed his support of offshore drilling. 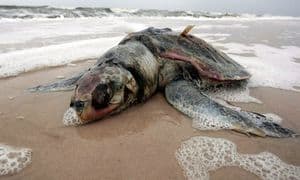 Said Arnold: “You turn on the television and see this enormous disaster, you say to yourself, ‘Why would we want to take on that kind of risk?’”

Dead turtles and other sea life has begun to come ashore in Mississippi:

"All along this strip, and the 26 miles of beaches to which it connects, people have been reporting similar mysterious sightings over the past couple of days. This morning eight sea turtles were found dead in Pass Christian, in addition to nine yesterday, bringing the total number of dead turtle sightings in the wider area to at least 31."

It's not known whether this is related to the oil spill, but the animals are being tested.

Previous Post: « Watch: OUT Magazine Turns the Cameras on Themselves
Next Post: Story from the Frontline of ‘Don’t Ask, Don’t Tell’:
Former Ssgt Anthony Loverde »