Interview with the Louisville Courier Journal: 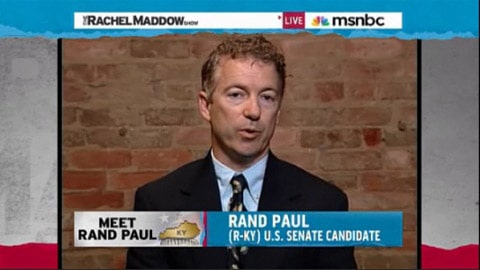 Rachel Maddow talked to Kentucky primary winner Rand Paul last night about his views on the Civil Rights Act and Paul's belief that the part of it that deals with private businesses and their right to discriminate should be reconsidered.

Said Paul: "I do defend and believe that the government should not be involved with institutional racism or discrimination or segregation in schools, busing, all those things. But had I been there, there would have been some discussion over one of the titles of the civil rights.And I think that's a valid point, and still a valid discussion, because the thing is, is if we want to harbor in on private businesses and their policies, then you have to have the discussion about: do you want to abridge the First Amendment as well. Do you want to say that because people say abhorrent things — you know, we still have this. We're having all this debate over hate speech and this and that. Can you have a newspaper and say abhorrent things? Can you march in a parade and believe in abhorrent things, you know?…"

A great interview from Maddow.

Said Paul to the Louisville Courier-Journal: "I don’t like the idea of telling private business owners—I abhor racism. I think it’s a bad business decision to exclude anybody from your restaurant—but, at the same time, I do believe in private ownership. But I absolutely think there should be no discrimination in anything that gets any public funding, and that’s most of what I think the Civil Rights Act was about in my mind."

In related news, CNN joked Tuesday night about Rand Paul celebrating his Tea Party win at a private country club, then defended it:

"King was the first to bring up Paul's choice of locale: 'I can't resist. This might come across as a bit of a cheap shot, but he's the tea party favorite or is he a country club Republican?'Amid some laughter, panel member Paul Begala scoffed: 'It's a cocktail party, not a tea party. It's the worst optics he could have.'When the yuks died down, King said that his team had looked it up, and 'the membership dues are not that obnoxious. It's like $7,500 a year. He is an eye doctor.'"