Australia's Western Bulldogs have decided to punish footballer Jason Akermanis by demoting him to the VFL for two weeks for remarks he made in a newspaper column telling gay players to stay in the closet because they wouldn't be welcome in the sport. 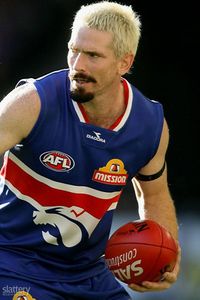 "The club announced Akermanis' penalty after Tuesday's discussions with the veteran forward, who will serve it once he recovers from what could be a two-week hamstring injury.

Akermanis accepted the sanction, saying: 'I have to take responsibility for everything I've done, and today is exactly that.  I think it's a good outcome for everyone at the club and myself – and that is what we do here; we are a very supportive group.  I can't really say what I expected except that we wanted an outcome that was mutually beneficial for everyone and I think that's exactly what's happened.'

Akermanis will also step away from his media work for three weeks at his own instigation, though club general manager of football operations James Fantasia said Akermanis' teammates had asked him to 'reassess his priorities to the group'.

'Jason will suspend his media activities for three weeks in response to this request, and during that time, will consider whether his media and football activities have struck the appropriate balance,' he said.

'In consequence, the playing group and management of the club have unanimously supported Jason and will continue to do so going forward.'"