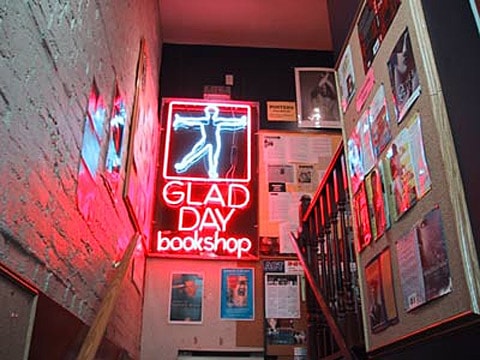 Glad Day Bookshop in Toronto, said to be North America's oldest by the Globe & Mail, appears to be on the verge of extinction:

"Glad Day has suffered a big decline in the past six months and fears it will be forced to shut its 40-year-old doors by the end of summer if things don't improve.

If that happens, Toronto will lose much more than a bookshop – it will lose an 'active archive' of gay heritage in the city and beyond, said co-manager Sholem Krishtalka.

'On the shelves of Glad Day we have books whereby you can essentially trace Toronto's queer history from the early days to now,' he said. It's this very important recording of queer culture.'

The store, which is also relied upon to stock queer libraries in other regions, is known as a centre for gay and lesbian rights activism and censorship battles. It became the oldest gay bookstore last March after New York City's Oscar Wilde bookstore closed its doors.

Most years around this time, Glad Day would be loading up on stock in preparation for Pride Week in June. This year, it hasn't bought much at all, and has also moved to a business plan that looks only two months ahead.

Certainly not a glad day for LGBT literature.