The Obama administration will go before a federal court next month in the awkward position of defending a policy which it also claims it is also actively working to repeal. 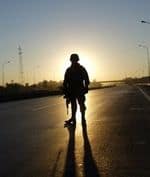 The AP: "A judge has agreed to hear a case challenging the U.S. government's 'don't ask, don't tell' policy against openly gay soldiers.
Lawyer Dan Woods says U.S. District Court Judge Virginia A. Phillips in Riverside, Calif. agreed Monday to send the case to trial July 13.
Woods is representing the Log Cabin Republicans, a group rights group.
He says the group hopes to end the 1993 policy by having it declared unconstitutional.
If the group wins, Woods says it could set a precedent for the entire nation."

Earlier this month, the Department of Justice asked the judge to defer proceedings in the case "because the political branches have taken concrete steps to facilitate repeal of the DADT statute."

Previous Post: « Virginia AG Ken Cuccinelli: Gay People Not Protected by the 14th Amendment Because its Writers Didn’t Have Them in Mind
Next Post: Joan Rivers: Young Gay Performers Hoping to be Romantic Idols Should Stay in the Closet »