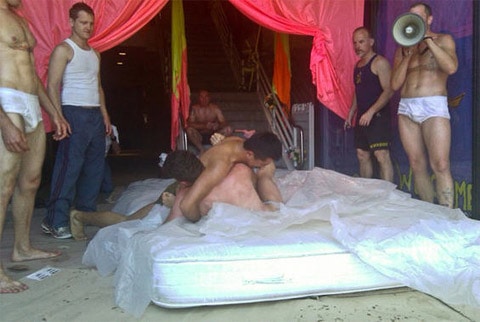 How to gays in San Francisco's Castro raise money for relief for the BP Gulf disaster? Wrestling in Canola oil on top of a mattress, of course:

"Dressed only in their underwear, pairs of well-muscled men took turns pouring vegetable oil over each other and then grappling together on top of a large mattress covered with a plastic sheet. ("Always use protection!" the announcer noted.) Volunteers took turns commenting on the matches through a large bullhorn and asking for cash donations from the crowd. There were about thirty bystanders by three o'clock, a few of them tanned and completely naked, in good Castro fashion, except for clusters of leaves adorning their genitals. The 'Crude Boys Oil Wrestling' matches, part of this week's Faetopia queer ecology exhibit on crude oil dependence, were raising money for The Florida Wild Mammal Association, organizer Kyle DeVries said."