Controversy erupted in central London over the weekend when Greencoat Boy Tavern, a pub chain, refused service to the Labour Party's Lesbian Gay Bisexual and Transgendered Rights group over their sexuality. 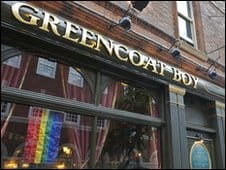 "The problems started over the LGBT Labour banner which the manager told members would cause 'offence to customers'.

During discussions, the manager revealed to members that the event – a post-AGM social which had been pre-booked – would have never gone ahead if he had know in advance if was for a gay organisation.

The police were called and statements were taken from three of the LGBT Labour leaders at Charring Cross police station.

During the evening the incident at one time was top of the 'trending' items in the UK on social networking site Twitter.

Messages of support came from Sarah Brown, wife of the former Prime Minister Gordon Brown, John Prescott, a former Deputy Prime Minister, and Sally Bercow, the wife of the Speaker of the House of Commons John Bercow."

Writes the BBC: "A Punch Taverns spokesman accepted that the customers were denied service and said the pub firm was investigating 'on what grounds this took place'.

The pub is now hanging a rainbow flag in its window. 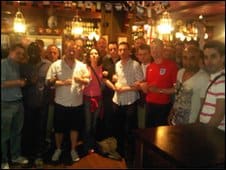 In a statement released this afternoon, LGBT Labour said it is looking for the company to treat the event with the up most seriousness, and take action to remedy the situation.

“We look forward to their suggestions on how they make amends and take a stand. We have some starting ideas of our own:

“An apology to the other staff working in the Greencoat Boy for being asked to not serve gay, lesbian, bisexual and trans people;

“Company training for managers of the chain of pubs on equality issues that includes the information on the Equally Bill (Sexual Orientation) Regulations 2007 and good practice on dealing with lgbt customers and homophobic issues.

“A refund and a rainbow flag put up outside the pub on Pride Day, a “Lesbian, Gay, Bisexual and Trans people welcome here” sign displayed prominently on arrival for at least 28 days and a complementary event with an LGBT group of their choice.

“We look forward to a meeting with senior people in the company and a speedy resolution to this issue,” the statement concluded.