Results from the U.S. National Longitudinal Lesbian Family Study (NLLFS), which was begun in 1986 of 154 women in 84 families who underwent artificial insemination to have children, and studied the development of those children, reveal that lesbian mothers are very good at child-rearing, TIME reports: 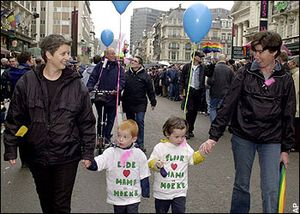 "The authors found that children raised by lesbian mothers — whether the mother was partnered or single — scored very similarly to children raised by heterosexual parents on measures of development and social behavior. These findings were expected, the authors said; however, they were surprised to discover that children in lesbian homes scored higher than kids in straight families on some psychological measures of self-esteem and confidence, did better academically and were less likely to have behavioral problems, such as rule-breaking and aggression.
'We simply expected to find no difference in psychological adjustment between adolescents reared in lesbian families and the normative sample of age-matched controls,' says [researcher Nanette] Gartrell. 'I was surprised to find that on some measures we found higher levels of [psychological] competency and lower levels of behavioral problems. It wasn't something I anticipated.'
In addition, children in same-sex-parent families whose mothers ended up separating, did as well as children in lesbian families in which the moms stayed together."