Details' Matt McAllester takes a look at the harmful practice of gay exorcism, and why people continue to sign up for it, even though it doesn't work: 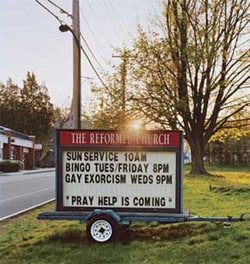 "Peterson Toscano, a gay Christian activist, underwent three exorcisms before coming to terms with his sexuality. One took place in the Greenpoint section of Brooklyn, another in an apartment on the West Side of Manhattan owned by Joanne Highley, who runs L.I.F.E. Ministry. During the latter exorcism, Highley had him lie down on her bed, then she sat beside him and began to press on his body, commanding the demons to exit through his mouth and rectum. Before the rite was complete, Toscano, who says he felt increasingly violated by Highley's actions, stopped the ritual and left her apartment. Highley did not respond to requests to be interviewed, but she has previously stated that her process is to 'cleanse and bind demonic powers . . . out of genitals, of course out of anal canals, out of intestines, out of throats and mouths if there's been ungodly deposit of semen in those areas—we cleanse with the blood of Jesus, and we cast out the demonic powers.' Some practitioners of deliverance believe that a demon has a physical as well as a spiritual form and can be purged through the orifices—thus an exorcism can be judged successful if the subject vomits, coughs up sputum, or, in rare cases, evacuates his bowels."

The latter, unfortunately, can also prove that he's successfully had the shit scared out of him.