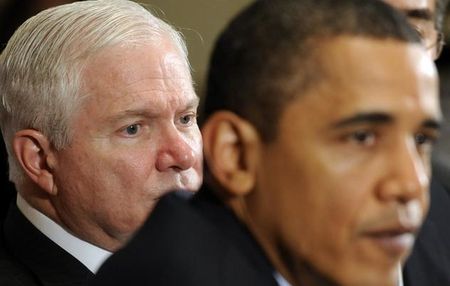 This isn't the first time there's been talk about the possibility of a veto. Robert Gates guested on "Fox News Sunday" today and told host Chris Wallace that it's not out of the realm.

Defense Secretary Robert Gates says President Barack Obama could end up vetoing legislation that would lift the ban on gays serving openly in the military. Obama supports repealing the law, and the White House has pushed for quicker congressional action than the Pentagon has favored. Gates also supports repeal.

But Gates tells "Fox News Sunday" that Obama probably still would veto an upcoming spending bill that includes the repeal — if the bill also contains money for defense projects he says are wasteful. Gates wants to get rid of an aircraft engine and additional transport aircraft that some lawmakers want to keep. They generally represent areas with defense contractors that would stand to lose business from the cuts.

It appears as if the clip of the interview isn't available on-line just yet, but I'll post it as soon as it is.

Update: Clip is AFTER THE JUMP.

Previous Post: « Singer Vanessa Carlton Comes Out As Bisexual
Next Post: James Franco: ‘I Would Be Happy To Play 100 Gay Roles’ »