Yesterday, a diarist at DailyKos pointed out some of the elements of the 2010 State Republican Party Platform of Texas, which include criminalizing sodomy and throwing anyone who issues a marriage license to a same-sex couple (even though such licenses are not valid in the state) into jail. 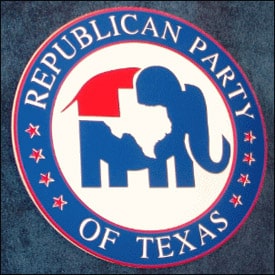 Family and Defense of Marriage – We support the definition of marriage as a God–ordained, legal and moral commitment only between a natural man and a natural woman, which is the foundational unit of a healthy society, and we oppose the assault on marriage by judicial activists. We call on the President and Congress to take immediate action to defend the sanctity of marriage. We are resolute that Congress exercise authority under the United States Constitution, and pass legislation withholding jurisdiction from the Federal Courts in cases involving family law, especially any changes in the definition of marriage. We further call on Congress to pass and the state legislatures to ratify a marriage amendment

declaring that marriage in the United States shall consist of and be recognized only as the union of a natural man and a natural woman. Neither the United States nor any state shall recognize or grant to any unmarried person the legal rights or status of a spouse. We oppose the recognition of and granting of benefits to people who represent themselves as domestic partners without being legally married. We advocate the repeal of laws that place an unfair tax burden on families. We call upon Congress to completely remove the marriage penalty in the tax code, whereby a married couple receives a smaller standard deduction than their unmarried counterparts living together. The primary family unit consists of those related by blood, heterosexual marriage, or adoption. The family is responsible for its own welfare, education, moral training, conduct, and property.

Family Values – We affirm that this section is a response to the attacks on traditional family values. These include well- funded, vigorous political and judicial attempts by powerful organizations and branches of the government to force acceptance, affirmation and normalization of homosexual behavior upon school children, parents, educational institutions, businesses, employees, government bodies and religious institutions and charities. These aggressive, intolerant efforts marginalize as bigots anyone who dissents.

Marriage and Divorce – We believe in the sanctity of marriage and that the integrity of this institution should be protected at all levels of government. We urge the Legislature to rescind no–fault divorce laws. We support Covenant Marriage.

Marriage Licenses – We support legislation that would make it a felony to issue a marriage license to a same-sex couple and for any civil official to perform a marriage ceremony for such.

Homosexuality – We believe that the practice of homosexuality tears at the fabric of society, contributes to the breakdown of the family unit, and leads to the spread of dangerous, communicable diseases. Homosexual behavior is contrary to the fundamental, unchanging truths that have been ordained by God, recognized by our country’s founders, and shared by the majority of Texans. Homosexuality must not be presented as an acceptable “alternative” lifestyle in our public education and policy, nor should “family” be redefined to include homosexual “couples.” We are opposed to any granting of special legal entitlements, refuse to recognize, or grant special privileges including, but not limited to: marriage between persons of the same sex (regardless of state of origin), custody of children by homosexuals, homosexual partner insurance or retirement benefits. We oppose any criminal or civil penalties against those who oppose homosexuality out of faith, conviction, or belief in traditional values.

Texas Sodomy Statutes – We oppose the legalization of sodomy. We demand that Congress exercise its authority granted by the U.S. Constitution to withhold jurisdiction from the federal courts from cases involving sodomy.

Here's the full PDF of the platform.

Two cases involving gays wanting a divorce are currently making their way through the Texas court system. In April, the Fifth District Court of Appeals heard arguments in the case of two gay men who were granted a divorce by judge Tena Callahan, and in late March, a lesbian couple was granted a divorce by Texas District Judge Scott Jenkins.