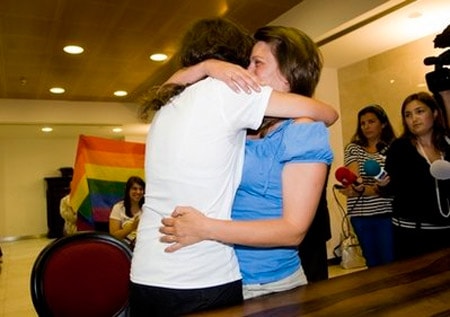 As the result of Portuguese President Anibal Cavaco Silva's decision in April and subsequent ratification of a marriage equality bill passed by parliament, a lesbian couple today became the first to marry in that country, the AP reports:

"Teresa Pires and Helena Paixao, divorced Portuguese mothers in their 30s who have been together since 2003, married in a 15-minute ceremony at a Lisbon registry office.
'This is a great victory, a dream come true," Pires said as the couple kissed and hugged.
"Now we're a family, that's the important thing,' Pires said, adding they would continue to fight for equal rights for homosexuals, including adoption….Pires and Paixao had campaigned for a change in the law since a registry office turned them away when they first tried to marry in 2006.
Officials argued the law stipulated that marriage was between people of different sexes. The women appealed to Portugal's Constitutional Court because the constitution forbids discrimination based on sexual orientation.
The court rejected their appeal, but left-of-center parties in Parliament supported the government bill which removed the reference to marriage being between different sexes."