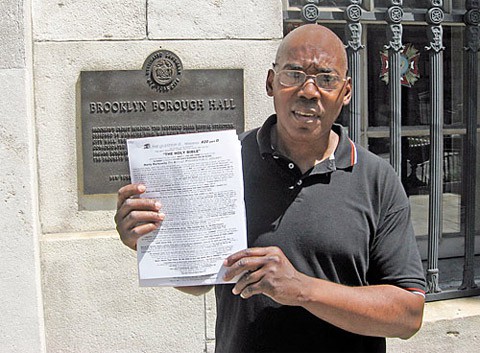 A police officer at Brooklyn's Borough Hall has taken it upon herself to be the bouncer at the public facility's bathrooms, an anti-gay preacher claims, because she doesn't like the homophobia he is serving up.

"Like all members of the public and the vendors outside Borough Hall, Brother J.J. Richardson was long allowed to use the bathrooms on the ground floor of the borough’s seat of power.

But Richardson, who sells Bibles when he’s not handing out homophobic, hate-filled pamphlets, says he was banned from seeking relief because his writing offended the police officer at the entrance desk.

To cover her tracks, there is now a sign saying that the bathrooms are closed to the public — but this reporter, and a trash collector, plus other vendors had no problem passing the cop’s litmus test the other day.

'She’s selective in who she lets in,' said another vendor, Aaron Harding, who sells clothing and other fabrics…Richardson said that his cries for relief were first rebuffed by Officer Gibson at Borough Hall on April 2. He nearly stained his pants with hellfire and brimstone, but fortunately made it to the Court Street Starbucks on time.

He quickly figured out that Gibson was barring only him, and turned his literary wrath against her. That’s when the sign barring everyone went up."