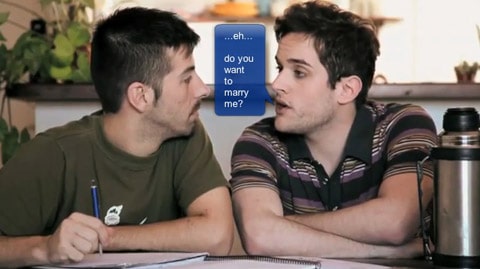 A marriage equality ad is airing in Argentina and pressure from Mormons and the Catholic Church is intensifying as that country's Senate considers a bill that would legalize same-sex marriage in the country.

As Steve mentioned yesterday, the Catholic Church has stepped up its campaign against gay marriage in the country, with Cardinal Jorge Bergoglio writing a letter to Argentine monasteries warning them that the "Father of Lies" (aka Satan) is behind the bill.

"Let's not be naive, we're not talking about a simple political battle; it is a destructive pretension against the plan of God," writes Bergoglio in a letter sent to the monasteries of Buenos Aires, where he is archbishop. "We are not talking about a mere bill, but rather a machination of the Father of Lies that seeks to confuse and deceive the children of God."

The AFP reports: "The Catholic Church in Argentina has stepped up its offensive against a gay marriage proposal, using Sunday Mass to urge its faithful to protest before Congress on the eve of a decisive Senate vote.The Latin American country, where 91 percent of the population says it is Catholic, could become the first nation in the region to pass a law legalizing marriage between same-sex couples if the Senate adopts the bill before it on Wednesday.The measure, which would grant the same rights to homosexual couples as heterosexual ones, cleared a first hurdle on May 5 in the lower chamber, but the Senate is gearing for a tougher battle."

The Mormons are stepping up pressure as well: "In a single-paragraph letter dated July 6 and read Sunday to Argentine congregations of The Church of Jesus Christ of Latter-day Saints, the church's First Presidency said the doctrine is 'absolutely clear: that marriage is between a man and a woman and is ordained of God.'Signed by LDS President Thomas S. Monson and his counselors, Presidents Henry B. Eyring and Dieter F. Uchtdorf, the letter said it was responding to concerns raised by proposed legislation that would change the definition of marriage in the South American nation."

The ad, translated by Andrés Duque of Blabbeando, AFTER THE JUMP…