Sounds like somebody's getting cocky now that his new church is so popular: 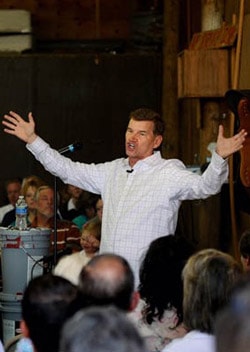 Ebullient as ever, bouncing with energy, Mr. Haggard said he is back doing what he was born to do.

"Tiger Woods needs to golf. Michael Vick needs to be playing football," Mr. Haggard said as his new congregation joined him and Gayle in their backyard for a post-worship picnic. Little kids, shrieking with joy, splashed in the pool. Men grilled burgers. Women set out chicken salad.

He acknowledged grave lapses of judgment in the episode he refers to as "my crisis." But Mr. Haggard also said that in his sorrow and shame, he accepted too much guilt after the scandal broke.

In February 2008, Mr. Haggard asked to be released from supervision by other clergy. His former church, New Life, consented, though officials there put out a pointed statement calling Mr. Haggard's recovery incomplete.

The four pastors who supervised Mr. Haggard wouldn't comment on his new church. New Life pointed to an earlier statement, released in November 2008, that said, "we cannot endorse his return to vocational ministry."