will urge lawmakers to include the Uniting American Families Act as part of a comprehensive immigration bill at a news conference today, Politico reports: 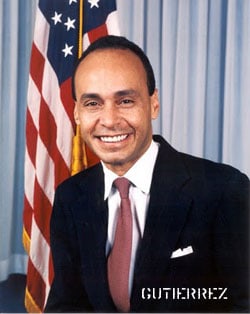 "Trying to broaden support for immigration reform, key Democratic lawmakers on Thursday will endorse legislation that would grant gay and lesbian Americans the ability to legally bring their foreign partners to the United States…More than 100 House Democrats, including many Hispanics, have signed on to the comprehensive immigration bill Gutierrez introduced last December. But Joanna Burgos, a National Republican Campaign Committee spokeswoman, said the gay-rights provision—opposed by the U.S. Conference of Catholic Bishops and National Association of Evangelicals—could scare away some of those supporters…With no GOP support, Gutierrez’s bill has stalled in the House. But he said on C-SPAN’s “Washington Journal” show Wednesday that he believes comprehensive immigration legislation has the backing of 200 of his colleagues, 17 votes shy of a majority.

Gutierrez and others are now trying to sweeten the legislation to attract more votes. And they’re targeting advocates for the Lesbian, Gay, Bisexual and Transgender community, a constituency that hasn’t before played a visible role in the immigration debate."

Said Gutierrez: “It’s the right thing to do. Families should be included, and as we move forward, that should be our guiding principle for comprehensive immigration reform. To use the old adage, the tent is big enough.”

Last December, Gutierrez appeared hesitant to include the UAFA. He appears to have changed his mind.