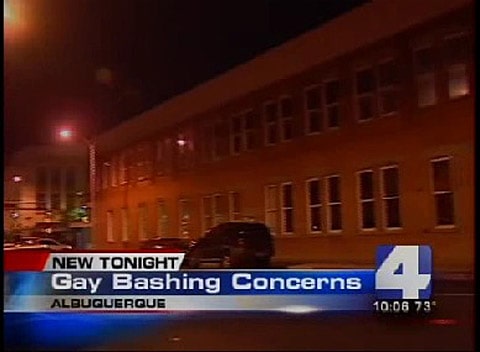 The weekend beating of a gay man outside the Effex nightclub in Albuquerque, New Mexico brought people out to a meeting last night in which they called for improved security in the area.

The gay man was beaten by a gang of several men after rushing to the assistance of a woman being assaulted by the gang.

KOAT reports: "Dozens in the local gay community are demanding change saying they don't feel safe in downtown Albuquerque. They claim there have been a lot of problems before this weekends beating and on Wednesday pleaded with the mayor's office and the police department to make some serious changes.'I don't think there's any way to describe how horrible it is,' said the victim.The victim said he wanted to remain anonymous in fear of retaliation. He said can't forget his experience after leaving the Effex Club on Saturday.'I was pushed back and held back we were both sprayed in the face with pepper spray just before they started to chase us,' the man said.He said he and his partner stopped to help a girl on a downtown sidewalk when five men ran after them yelling derogatory statements about their sexual orientation. Then, he said they started kicking his significant other.'His knee was shattered. His leg was broken and he's in a lot of pain,' he said. 'I am scared to go downtown and it's up to you and to you to help make this a safe place not just for the gay community, but for all people.'"

Police and the DA's office are not classifying it as a hate crime at this time because the motivation for the crime, they say, is unclear.

Watch a news report from local station KOB, AFTER THE JUMP…