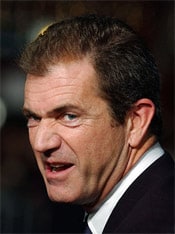 On Friday, Gawker posted a laundry list of Mel Gibson's past rants, which include invective directed at gays.

"They take it up the ass. [laughs, stands up, bends over, points to anus] This is only for taking a shit." —to Spanish newspaper El Pais when asked what he thinks of gays, in 1991.

"With this look, who's going to think I'm gay? I don't lend myself to that type of confusion. Do I look like a homosexual? Do I talk like them? Do I move like them?" —from the El Pais interview.

"I'll apologize when hell freezes over. They can fuck off." —to Playboy in 1995, about whether he'd issue an apology to gays and lesbians, as GLAAD recommended.

The audio of Gibson's rant against his girlfriend, AFTER THE JUMP (nsfw graphic, racist language)…