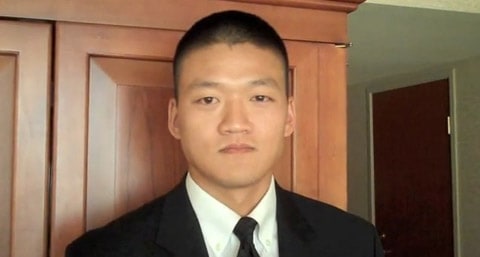 As I noted on Wednesday, Lieutenant Dan Choi has been officially discharged from the U.S. Army under "Don't Ask, Don't Tell. Newsweek reported yesterday:

"Earlier this morning he got the call. It was from his commander at the 1/69 Infantry Regiment of the New York Army National Guard, and it was bad news. Choi had also just learned from another source that a letter had been received some time ago, with confirmed receipt by his father in Orange County, Calif., officially declaring him kicked out of the Army. 'But my dad and I are not on speaking terms,' says Choi, who had not been informed of the letter by his family."

My Statement on DADT Discharge

This morning I received notification of my honorable discharge from the army under "Don't Ask, Don't Tell." After 11 years since beginning my journey at West Point and after 17 months of serving openly as an infantry officer this is both an infuriating and painful announcement.

But my service continues. To all those veterans who have endured similar trials and injustices or prematurely ended their military service because of the unjust policy: our fight has only begun.

The true honor and dignity of service does not come from a piece of paper, a pension or paycheck, a rank or status; only an unflinching commitment to improve the lives of others can determine the nature of one's service. From the first moment we put on our nation's uniform and swore our solemn oath, we committed ourselves to fight for freedom and justice; to defend our constitution and put the needs of others before our own. This is not an oath that I intend to abandon. Doing so at such a time, or remaining silent when our family and community members are fired or punished for who they truly are would be an unequivocal moral dereliction that tarnishes the honor of the uniform and insults the meaning of America.

Watch Choi's interview yesterday with Americablog's Joe Sudbay at Netroots Nation, and on the Rachel Maddow show, AFTER THE JUMP…