At first the movie positions itself within the familiar heist movie subgenre, complete with "one last job!" motivation for the extractor Dom Cobb, who just wants to be reunited with his children after a troubled relationship with his wife. (DiCaprio has worn quite a groove in this 'man wounded by psychologically disturbed wife' track now after Revolutionary Road and Shutter Island and this. Time to move on?). In a risky move, the screenplay flips the usual heist scenario on its head while simultaneously attempting to explain its rules in the first place. The dream team's job, commissioned by "The Tourist" (Ken Watanabe), is not to steal an idea but to plant one in the head of a rival businessman "The Mark" (Cillian Murphy) whose father is dying — Cue pop psychology and boilerplate daddy/son issues. Unforeseen complications in this assignment force improvisational action and the second half of the movie becomes a dizzying matryoshka doll; Dreams are nested within dreams, which are nested in other dreams. All of this allows for much state of the art movie wizardry, which is a joy to behold. The dream worlds are fraught with dangers to the psyche (if not the literal body) in the form of subconscious projections. [MINOR SPOILER ALERT] The film's most interesting character is arguably Cobb's wife Mal, played by Marion Cotillard. It's telling that she's the best female character yet in a Chris Nolan movie since she's actually not a real woman but an anxiety-ridden male projection of one. [/SPOILER]

In a heady movie like this one where there's so much world building and plot twists to keep track of, Nolan makes a wise decision to lean hard on familiar emotional throughlines. If only these Psychology 101 elements weren't weighted like profundities! The movie could have used more humor in this regard since the few funny bits go a long way toward rounding out the often portentous mood. One of the best moments is a recurring shot of a van driving off a bridge and falling for what seems like hours before hitting the water. It's a great movie joke about the flexibility of time in both dreams and movies themselves. Tom Hardy, a star in waiting, steals his every scene merely by showing a sense of humor that's missing from the film's other thin characterizations.

Joseph Gordon Levitt is the third acting MVP, using his physical grace to great effect in the film's best action sequence, a zero gravity fight and team rescue. The entire setpiece is an absolute stunner and far more imaginative than the rest of the action, which relies heavily on no REM stage required action staples, namely guns and explosions.

The great Italian director Federico Fellini once said that

"Talking about dreams is like talking about movies, since the cinema uses the language of dreams; years can pass in a second and you can hop from one place to another. It’s a language made of image.”

In the language of the image, above all else, Inception is eye popping. How you feel about Inception may well boil down to how well you respond to its visual design. Though the epic images are weirdly devoid of the sexuality and the surrealism that are hallmarks of most artistic representations of dream imagery (You'll have to watch Fellini’s own work or David Lynch’s for gifts in that realm), they're of a piece with Inception's puzzle-like nature and its fascination with man as builder of his own empire.  We're watching artificially constructed dreams, but Inception is often an authentically dreamy summer movie all the same. 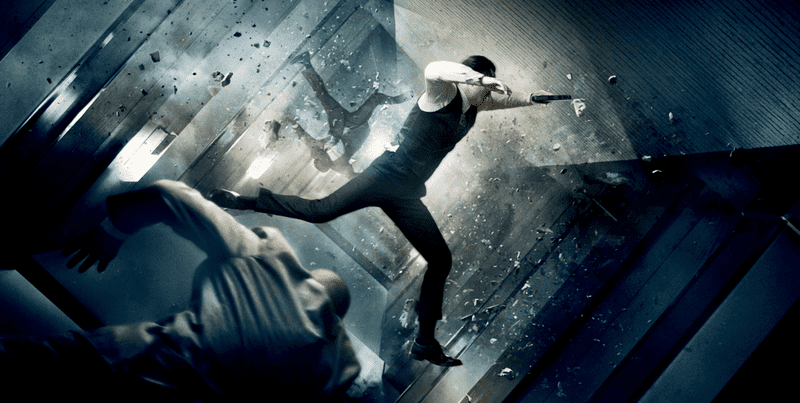 Your Feature Presentation
Summer isn't generally the season of auteur flicks and INCEPTION is the exception that proves the rule. It stands out. If it's not the best mainstream movie of the summer (Toy Story 3 already won the title), it wins the prize for most ambitious. Christopher Nolan first won critical adulation with Memento (2000) and he's proven remarkably consistent ever since. His bulky busy movies are always about men with personal demons in conflict with other men with personal demons (female characters are mere window dressing) who have to navigate an often mind-bending narrative while wearing what amounts to a pop psychology exoskeleton. (See also: The Prestige, Batman Begins, The Dark Knight and Insomnia.)

Inception is a tough film to describe and occasionally to follow. The multi-layered plot involves a team of dream infiltrators who are hired by corporations to steal ideas, the theory being that once you know something, it can always be found in your mind. The sci-fi premise is complicated as is the business of dream theft. Whole teams with specific roles and skill sets are required. You have to have "The Point Man" (Joseph Gordon Levitt) for logistics, "The Extractor" (Leonardo DiCaprio) to steal the idea, "The Architect"(Ellen Page) to design the dream world in maze like fashion (for reasons best left to discover in the movie), "The Forger" (Tom Hardy) who can shape shift within the dream for strategic purposes and still more players, too. A lot of explanation is required to understand the complex set of rules governing this artificial dream world but thankfully it's fascinating enough to mitigate the annoyance of the near constant intrusion of expository dialogue. One would immediately welcome a sequel that could dispense with all the explanations to get straight to the big visuals and suspense.

MORE dreaming, AFTER THE JUMP…