The Washington Post reports that, though there has been no official statement from the Tea Partyregarding the recent striking down of the Defense of Marriage Act because of the party's wish to remain fiscally and not socially focused, many of its members support the court's decision: 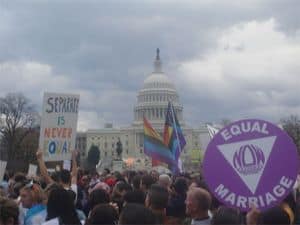 "The silence is by design, activists with the loosely affiliated movement said, because it is held together by an exclusive focus on fiscal matters and its avoidance of divisive social issues such as abortion and gay marriage. Privately, though, many said they back the decision because it emphasizes the legal philosophy of states' rights…'I do think it's a state's right,' said Phillip Dennis, Texas state coordinator for the Tea Party Patriots. The group does not take a position on social issues, he said, but personally, 'I believe that if the people in Massachusetts want gay people to get married, then they should allow it, just as people in Utah do not support abortion. They should have the right to vote against that.'

Everett Wilkinson, state director for the Florida Tea Party Patriots, agreed: 'On the issue [of gay marriage] itself, we have no stance, but any time a state's rights or powers are encouraged over the federal government, it is a good thing.'"