A case brought by the Log Cabin Republicans in which the Obama administration will be compelled to defend the "Don't Ask, Don't Tell" policy it claims it is actively trying to repeal, begins today in a federal court in Riverside, California: 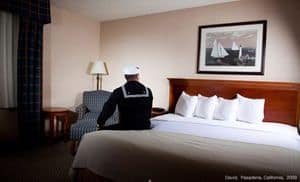 "'We're trying to have the whole statute thrown out,' said lead attorney Dan Woods. Over the course of the two week trial, Woods plans to call several expert witnesses and at least five former service members, who will tell the court how they were discharged under the policy for reasons unrelated to their performance. At least one heterosexual service member also is expected to testify about how working with gay men made no difference in his military service, Woods said.

The judge in the case decided last week that the case could proceed despite government objections. Justice Department lawyers will argue that LCR has failed to identify any of its members personally harmed by the gay ban and that the group's claims of unconstitutionality fail under court precedent, according to government court briefs."

Said Justice Department spokesman Tracy Schmaler: "The Justice Department is defending the statute, as it traditionally does when acts of Congress are challenged. The president believes and has repeatedly affirmed that 'don't ask, don't tell' is a bad policy that harms our national security and undermines our military effectiveness, because it requires the discharge of brave Americans who wish to serve this country honorably. The president and his administration are working with the military leadership and Congress to repeal this law."