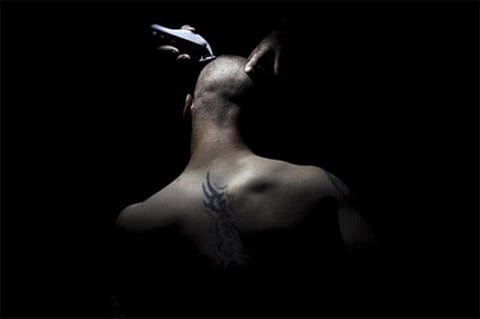 A U.S. soldier from Bravo Company, 2nd Battalion of the 508 Parachute Infantry Regiment of the 82nd Airborne, has his head shaved by flashlight outside Kandahar. (via daylife)

The Defense Department's surveys of 400,000 service members on the "Don't Ask, Don't Tell" policy hit inboxes today. As Steve noted last week, some of the questions were leaked early, and were revealed to be skewed, homophobic, and altogether unsavory, dealing with issues like showers and social functions. SLDN said it was "far more skewed than we even expected it to be, given the working group's commitment to staying neutral." You can read it here (PDF).

The Palm Center reviewed the survey and came to this conclusion in a policy response brief:

"Our conclusion is that results of this survey should be considered during Pentagon’s decision-making process, but should not be seen as determinative in and of themselves.The military is unique and unlike civilian government agencies or corporations. As such, its internal processes, while daunting, also allow for exceptional results. We believe that the services can smoothly implement the transition to a fully inclusive “open service” policy in 2011 in a manner that serves as an example to foreign militaries around the world."

Nate Silver of FiveThirtyEight.com analyzed the survey and came to the conclusion that "parts of it are completely useless."

Why? Two of his reasons are that "given that the army that isn't supposed to have any (openly) gay soldiers, the survey asks the troops to engage in an awful lot of speculation about the gay soldiers in their midst" and "it more measures the relationship between gossip and unit morale than anything having to do with homosexuality per se. Although this might be modestly interesting as a sociological experiment, any conclusions that it purports to come to about the impact of DADT on morale should be ignored."

Servicemembers United wants the Pentagon and Westat (the pollster) to refund American taxpayers the $4.4 million it cost for the survey. There's a petition.

Americablog notes that the survey shows that the Pentagon is seriously considering possible segregation of troops:  Segregation, folks. Separate but equal. In the year 2010. And from a black president, no less.

Transcription of Geoff Morrell news conference: "We think it would be irresponsible to conduct a survey that didn’t try to address these types of things. Because when DADT is repealed, we will have to determine if there are any challenges in those particular areas, any adjustments that need to be made in terms of how we educate the force to handle those situations, or perhaps even facility adjustments that need to be made to deal with those scenarios."

The Pentagon today denied Americablog's claim. Morrell: "No one is talking about segregating gay servicemembers from straight servicemembers. We don't know that any adjustment will have to be made, but in the event that's a recommendation from the review group, it would not result in any 'separate but equal' facilities."

TIME magazine wonders why we are polling the troops:

"For generations, the military mind-set has been, If we want you to have an opinion, we'll issue you one. So why is the Pentagon asking troops how they'll feel if forced to serve alongside openly gay comrades?'This is a very dangerous precedent,' says Lawrence Korb, who ran the Pentagon's personnel office during the Reagan Administration. "It gives the troops the feeling that they have a veto over what the top people want." Not everyone agrees. 'What matters is the morale of the force in the field,' says Ralph Peters, a retired Army officer and military scholar. 'The survey is an honest attempt to suss out what the effects on morale might be.'"

Chris Geidner at MetroWeekly follows up on the July 9 news conference with Pentagon spokesman Geoff Morrell, posting the full answers to questions about polling sample size, assessment of the survey, and who came up with the questions.

Former Senator Sam Nunn, who was partially responsible for the institution of DADT back in 1993, appeared to offer support for lifting it in a recent phone interview, saying, "“If they can mitigate the damage and make sure the military can properly administer (the repeal) in a fair way, but in a way that protects unit cohesion and the morale of our forces, then I would favor making whatever changes are necessary."

"The way some of the survey questions are structured is enough to make one think that its creators are as obsessed with gay sexuality as those who practice it regularly. In fact, the survey really hit the nail on the head with the whole shower thing. I wasn't able to shower for the first three weeks of my tour in Iraq, and what do you think I was looking forward to the most when I finally got the opportunity to take one? Was it perhaps the opportunity to remove the thick film of gruel that encased my skin no matter how many times I wiped myself down with the wet naps provided with our meals? If you thought that, you were wrong. It was obviously the opportunity to sneak a peek at other soldiers in the showers, soldiers who were equally if not more as disgusting as me at that point. Sexy, right? I sure thought so, but imagine my SHOCK that there were private showers! In Iraq! It was almost enough to make me want to give my two weeks' notice right then and there."