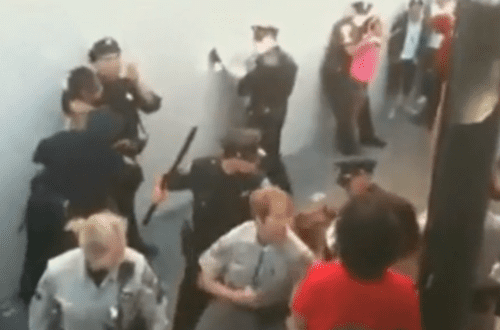 The city's police have responded to video footage that has recently popped up online that shows officers beating and then arresting several people during Gay Pride. Police were initially called to the area where the incident occurred to deal with a scuffle between two women. It appears as if several people clearly attacked the cops.

"Tomioka said the department's internal affairs division is investigating the use of force by the officers. 'It's an ongoing investigation, but use of force…it's why we try to talk to people, but when we have no other option, use of force is required, unfortunately,' Tomioka said. "But to the public, it never looks pretty. 'The officers gave commands, which were ignored,' Tomioka said. 'When an officer gives an order to move or to stop, those are orders, and they need to be complied with.'"

The department is currently investigating the use of force. Watch the incident, which is AFTER THE JUMP, and judge yourself if the police were excessive in their use of force.

Previous Post: « Arson Suspected In Gay Pride Float Fire
Next Post: Accused Vancouver Gay-Basher: ‘I Have Gay Friends And I’m Fine With Them As Long As They Don’t Hit On Me’ »