The Washington Blade piece focuses on the lack of progress with many LGBT-focused bills in DC including the Employment Non-Discrimination Act, the Domestic Partnership Benefits & Obligations Act, and, of course, DADT.

A passage from the piece about ENDA which Barney Frank seems optimistic about: 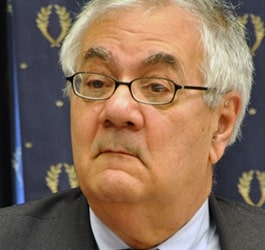 Despite the limited time remaining this year, some LGBT rights supporters are hopeful that Congress will move forward with additional legislation. U.S. Rep. Barney Frank (D-Mass.), a gay lawmaker and House sponsor of ENDA, expressed optimism about the bill passing the House this year.

“That’s going to be next thing we’ll turn our attention to,” Frank said. “We have the speaker’s support and we’re still trying to figure out a way to get that done.”

And as far as the future goes? November could make all of the difference.

Whatever progress this Congress makes on passing pro-LGBT bills, recent polls are casting doubts on whether enough Democratic lawmakers will retain their seats next Congress to pass such bills. Several recent polls have shown considerable opposition toward Democrats and the Obama administration as persistent unemployment and concerns about government spending linger across the country.

White House Press Secretary Robert Gibbs gained media attention and inspired consternation among Democratic House members when, during an appearance earlier this month on NBC’s “Meet the Press,” he said Republicans could regain control of the House.

“I think people are going to have a choice to make in the fall,” Gibbs said. “But I think there’s no doubt there are enough seats in play that could cause Republicans to gain control. There’s no doubt about that.” Larry Sabato, a political scientist at the University of Virginia, is projecting that Republicans will win seven seats in the Senate and 32 seats in House after the election. Because of this potential shift, Sabato said passage of more pro-LGBT bills next Congress is unlikely if it doesn’t happen this year.

“If these pieces of legislation don’t pass now, when both houses have swollen Democratic majorities, they certainly aren’t going to pass in the next Congress, when Democrats will have narrow majorities, or even be in the minority,” Sabato said.