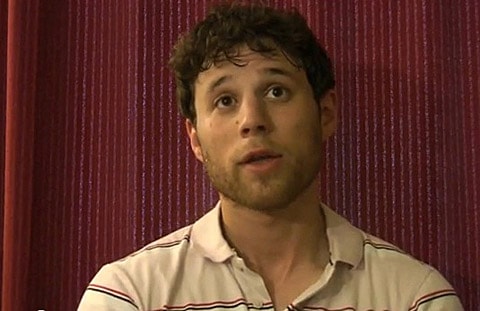 Truth Wins Out released a video today in which Ben Unger (above) and Chaim Levin, two former clients  ('ex-gay' survivors) of JONAH (Jews Offering New Alternatives to Homosexuality), blasted the group and its lead therapist Alan Downing, accusing Downing of a "psychological striptease" in which he watched them disrobe and touch their bodies.

Said Unger: He was encouraging me, ‘it’s okay Ben, you can take your shirt off’…here was a man that was much older than me, and I was around 20. At that point, I was just staring at a mirror with my shirt off and he was right behind me staring at the mirror with me at my body. Then telling me to look at my body and feel my body. It was weird.”

Downing claimed that appreciating their own bodies and masculinity would turn the young men into heterosexuals.

Watch Unger and Levin describe their experiences, AFTER THE JUMP…

Previous Post: « Ireland’s Civil Partnership Bill Signed into Law
Next Post: Hillary Clinton Celebrates the Right of Americans to Marry Whomever They Want »