A Sudanese court ruled that 19 men violated Sudan's morality codes after being discovered wearing women's clothes and dancing during a raid on an alleged "same-sex wedding" party, sentencing them to 30 lashes and a fine, Reuters reports: 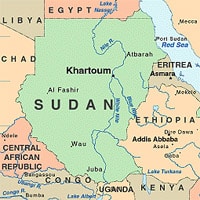 "Many of the defendants tried to hide their faces from the around 200 people who watched as they were lashed straight after their sentencing. The men had no lawyers present and said nothing in their own defence.

The trial judge said police had raided a party thrown by the 19 men and found them dancing 'in a womanly fashion', wearing women's clothes and makeup. He said there was a video of the party and that one woman who was present had fled the scene…Local newspapers reported that the party was held to celebrate a same-sex wedding, propelling it into a talking point all over Khartoum's conservative Muslim society. The court on Wednesday made no mention of a marriage ceremony.

One lawyer present, who declined to be named, said legal advocates would have been afraid to take on such a defence."