Charlie Crist once again reiterated his stance on marriage equality – meaning, of course, that he still doesn't support it. He also once again talked about his belief of being a "live and let live" kind of guy, something we've heard him say before.

CNN's Ed Henry interviewed Crist and asked him how he feels about about a constitutional ban on same-sex marriage. 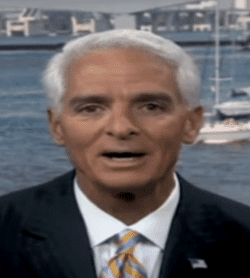 Said Crist: "I feel the same way, yes, because I feel that marriage is a sacred institution, if you will. But I do believe in tolerance. I'm a live and let live kind of guy, and while I feel that way about marriage, I think if partners want to have the opportunity to live together, I don't have a problem with that."

"And I think that's where most of America is. So I think that you know, you have to speak from the heart about these issues. They are very personal. They have a significant impact on an awful lot of people and the less the government is telling people what to do, the better off we're all going to be. But when it comes to marriage, I think it is a sacred institution. I believe it is between a man and woman, but partners living together, I don't have a problem with."

Crist's response: "Well, everything is in a matter of degree, Ed, and when it becomes to the institution of marriage, I believe that it is between a man and a woman, it's just how I feel."

In 2008, Crist said Sarah Palin would do a "great job" as president. Henry asked him the same question again and got a difference response. Unfortunately, not a more reassuring one. Watch the clip, AFTER THE JUMP.