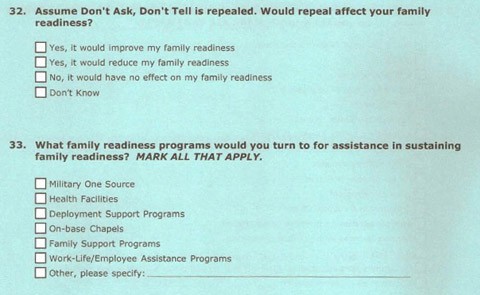 The Pentagon has sent out the second part to its military survey on "Don't Ask, Don't Tell", this time to approximately 150,000 military spouses, and it shows much of the same insensitivity that the first survey did.

The survey, according to Politico, was accompanied by a letter from Defense Sec'y Robert Gates, which read:

"“As you know, in his State of the Union address this year, President Obama called upon the Congress to repeal the law commonly known as Don't Ask, Don't Tell. Following that, I directed the Department of Defense to consider how to best implement a repeal of this law should that occur. This survey is part of that effort. Your responses to this survey will help us assess the impact of a change in the Don't Ask, Don't Tell law and policy on family readiness and recruiting and retention.”

Servicemembers United has posted the survey.

"This survey of military spouses contains many of the same insulting and derogatory assumptions and insinuations about gays and lesbians that ran throughout the last survey. Answer choices suggest things like the Defense Department possibly distributing flyers in military neighborhoods if, as they say, 'Don't Ask, Don't Tell' is repealed and that the 'readiness' of military families might somehow be impacted. Again we stress that neither the President, the Secretary of Defense, the Chairman of the Joint Chiefs of Staff nor anyone else would ever stand for such insulting questions being asked about any other minority group in the military in this day and age. The Pentagon's senior leadership should seriously consider Servicemembers United's offer to meet with them in person to talk about the insensitivity of these surveys and how the poor handling of these surveys might negatively impact implementation."