Mexico City's Mayor Marcelo Ebrand is suing the Bishop of Guadalajara, Cardinal Juan Sandoval Iniguez, after Sandoval made public remarks that the Mexican Supreme Court was bribed to rule in favor of gay marriage and gay adoptions, the L.A. Times reports: 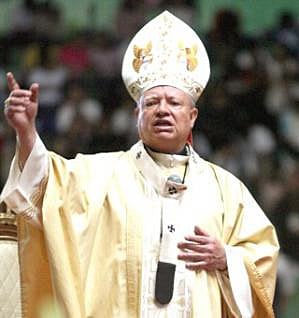 "Sandoval made the allegations on Sunday during an event in Aguascalientes state. He also used a slur against gays while decrying the recent high court decisions that were called victories for the gay-rights community, as L.A. Times correspondent Tracy Wilkinson analyzes in this story.

Church authorities were not backing down. Sandoval said Monday he would not retract his comments, and the archdiocese in Guadalajara later said it had proof of the allegations against the Supreme Court justices (link in Spanish). Statements in support were issued from the archdiocese in Mexico City, while the Bishops' Conference of Mexico also said it supports Sandoval."

Said Ebrard, smacking down Sandoval: "We live in a secular state, and here, whether we like it or not, the law rules the land. The cardinal must submit to the law of the land, like all other citizens of this country."