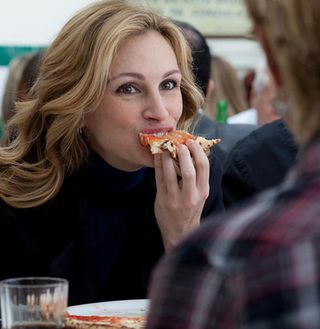 (Left: Julia Roberts as Liz Gilbert "I'm having a relationship with my pizza")

There's a sense while watching Eat Pray Love that it hasn't quite worked out how to be a movie. The excessive narration suggests that it's an audio book with slide show and this crutch is unnecessary. Prolific gay creative force Ryan Murphy (Glee, Nip/Tuck) is more sure-handed behind the camera than he was on his first feature (Running With Scissors) and the beauty of the images (courtesy of renowned cinematographer Robert Richardson) combined with the emotional accessibility of Julia Roberts are better Baedekers while traveling. Though it's repetitive and maybe a little pandering to its mature female demographic (Food porn? Check. Several hot men? You got it. Reassuring messages about fulfillment later in life? Si.) it definitely has its moments. It's essentially told in four acts: New York, Rome, India, Bali. India gets a little draggy but "Pray" isn't the best cinematic verb. Rome ("Eat") is the most enjoyable. Julia seems to truly relish emptying her plate and there's a great bit where she teaches hunky Italian actor Luca Argentero that the American word for wine is "therapist". Ha ha. 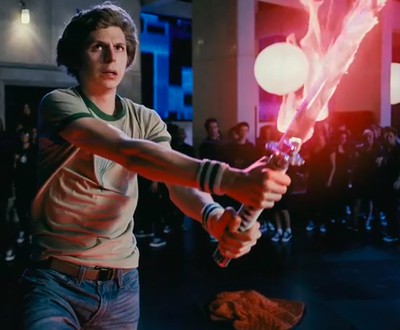 (Left: Michael Cera as Scott Pilgrim. He's finally got [The Sword of] Self Respect.)

Scott Pilgrim vs. The World clings to its original source medium just as tightly as the Julia Roberts movie but the effect is smoother. After all, comic books are cinematic by their very nature, being a series of narrative images. Scott Pilgrim is also steeped in video game culture but for once that works in a movie since it's not an uncomfortable graft that's only there to please intended demographics. Not that Scott Pilgrim isn't preaching hard to its young male choir (Beautiful dream girls? Check. Nerdy guys winning them? duh! Reassuring messages about nerds being bad-asses when push comes to shove? Guess.) Scott's adventure to win Ramona is told in a series of seven setpieces (though it's not quite as simple as one battle per ex), the best of which are with two cocky lookers Brandon Routh (Superman Returns) as a vegan bassist and Chris Evans poking fun (at himself?) at the conceited action star type. The entire cast is really game for the stylized comedy including Anna Kendrick as Scott's bossy sister and Keiran Culkin as his gay roommate, who have quite a funny relationship. Michael Cera knows just how far to push both Scott's geek factor and his own star charisma and wins big laughs from things as simple as his drink choices (Coke Zero) and his line delivery whenever the word "lesbian" pops up. Which is often.

Eat Pray Love and Scott Pilgrim vs. The World are pitchedto entirely different audiences and their constituencies might well think that the other movie has nothing to say to them, but they'd be wrong. The message is the same, they're just speaking different languages. Scott Pilgrim is younger and more playful but has less heft (it's hard to raise the emotional stakes in a video game context) whereas Eat Pray Love is more literal-minded but has that 'last chance' true story pull. The takeaway is the same: To be your best self, you're going to have to be honest and forgiving; if you want true love, you're going to have to make peace with the past… or defeat it in battle. You vs. Your Personal Baggage. It's as if Hollywood is playing therapist and they've decided this is the message we all need to hear at summer's end.

Wine or Coke Zero? Your choice. 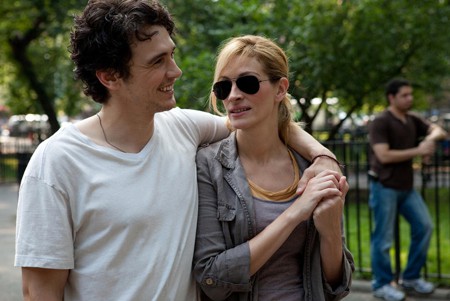 **Editor's note: Our apologies — though we'll blame an attempt at summer hours — that this didn't get posted Friday. Enjoy.

Your Feature Presentations
For this weekend's moviegoing adventure, may I suggest a film about a whiny protagonist who dives too quick into romances, breaking innocent hearts? The movie is actually pretty good even though you'll want to slap some sense into the lead on occasion. If only our hero could find a little personal redemption and a way around the personal baggage that comes with multiple exes. What movie were we talking about again? Oh yes, Scott Pilgrim vs. The World ! Or was it Eat Pray Love?

Eat Pray Love is based on the best-selling memoir by Elizabeth Gilbert. "Liz" (Julia Roberts) is a beautiful writer in New York City. She's still hurting from a painful divorce from Stephen (Billy Crudup). She jumps into a new relationship with David (James Franco) who is too young for her. She's ambivalent and unhappy. She remembers an old prophecy from a healer in Bali and decides that returning there is the fresh start she needs. In order to find balance and inner peace, she'll have to forgive herself for that trail of exes and learn to trust in love again.

Scott Pilgrim vs. The World is based on a series of very funny comic books. "Scott Pilgrim" (Michael Cera) is a 22 year old bassist hipster in Toronto. He's still hurting from a painful breakup from Envy (Brie Larson). He jumps into a new relationship with Knives Chau (Ellen Wong) who is too young for him. He's ambivalent and unhappy. When he sees his dream girl (literally) Ramona Flowers (Mary Elizabeth Winstead), he wants to make a fresh start. In order to be with her, he'll have to forgive her that trail of seven evil exes and defeat them in battle

MORE after the jump.