In a diary post, Film critic Roger Ebert writes about his history with gay people and Obama's baffling position opposing marriage equality, placing it in the context of administrations past, and his own life. 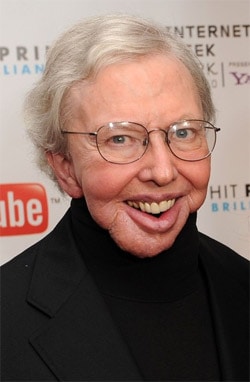 Now the idea of gay marriage is much before us. They've been made legal in some states. They are fiercely opposed, most often on religious grounds. Politicians find it prudent to play to both sides of the street by saying they "have no opposition to civil ceremonies." I'm disappointed in Obama for taking that approach. He supports the civil rights but opposes gay marriage while citing his church's teachings.

At least you can't accuse him of catering to his base. I would have preferred that he'd added that a religious marriage is a matter for each church, but that the state should make no distinction in the matter of a civil ceremony.

Some politicians are held hostage by their bases. The Bush administration is thought to have been the most homophobic in recent history. In 2004, George W. Bush endorsed a constitutional amendment to ban same-sex marriages. This was backed by anti-marriage forces seeking a way to negate the actions of individual states in legalizing gay marriage.

But let's look more closely at his administration. Dick Cheney has a lesbian daughter, and a year ago he made a statement in support of same-sex marriages, adding that it should "traditionally" left up to each state. Even at the time, he declined to get on board, only observing that it was "administration policy." We learned earlier this year that Laura Bush supports the right to gay marriage. Now we learn that Ken Mehlman, head of the Republican National Committee during that time, who spearheaded the fight for the constitutional amendment, is gay.

I heard on NPR today that an interviewer for the Atlantic asked Mehlman what Bush's reaction to his news was. Mehlman replied that some days before he made his announcement, when rumors of it were circulating in GOP inner circles, George Bush reached out to him and offered help and encouragement. I was touched to learn this. Now we have to wonder: If that's the way Bush, Cheney and Mehlman thought, why was the administration's anti-gay agenda being pushed?

Was it because it seemed like a popular policy at the time? Was it playing to the party's southern evangelical base? Whatever the reasons, we now know that the word has gone out to the GOP's 2010 candidates to soft-pedal opposition to homosexuality and gay marriage. Public opinion is perceived to be shifting on the topic. It seems odd to me that on this issue, Barack Obama is more conservative than Dick Cheney, George Bush and my mother.

In the Chapel Bells are Ringing [Roger Ebert]