Just the Facts About Sexual Orientation and Youth.

As Steve noted in his round-up, Focus on the Family has taken aim at a program from the Gay, Lesbian and Straight Education Network called "Just the Facts About Sexual Orientation and Youth" which is being provided to public schools around the country in an effort to stop bullying and promote tolerance of LGBT youth, so that incidents like the Lawrence King murder don't happen. 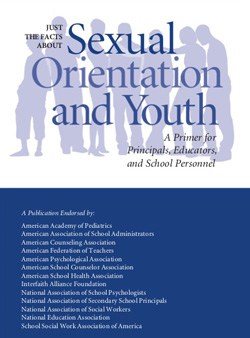 Focus on the Family is again raising objections to the booklet, although it is supported by a coalition, formed in 1998, of medical, education, and mental health groups, and has been published for several years.

"Focus on the Family education expert Candi Cushman told The Denver Post in Saturday's editions that the Christian group supports bullying prevention but that the issue "is being hijacked by activists." "We feel more and more that activists are being deceptive in using anti-bullying rhetoric to introduce their viewpoints, while the viewpoint of Christian students and parents are increasingly belittled," Cushman said. The Colorado Springs-based group said conservative Christians are portrayed as bigots for their opposing viewpoints, while public schools increasingly teach students that homosexuality should be accepted…Focus on the Family took aim at a 24-page GLSEN booklet titled, 'Just the Facts About Sexual Orientation and Youth.' It will be delivered to public school superintendents around the country, Focus on the Family said. 'The theme: Schools are only allowed to provide one message about homosexuality—that it's normal and should be embraced,' Focus on the Family said. Byard said the idea for the booklet came from GLSEN but that it was authored by a coalition of medical, mental-health and education organizations."

You can read the booklet, AFTER THE JUMP…