Michael Luongo reports on the gay scene in Baghdad, which he first visited in 2007: 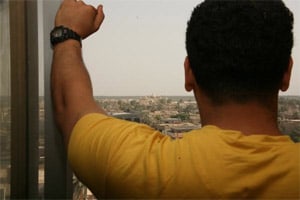 This visit would be full of stark contrasts. It was as if there were two different Baghdads — at least. I would interview men from Sadr City, one of the poorest, most dangerous districts, who talked about friends killed by sprays of bullets in drive-by shootings, their gathering places firebombed, their names posted on lists, others raped and disappeared by militia-infested police squadrons at checkpoints.

I would see a hospital where the bodies of gay men had been dumped, their anuses closed shut from a heavy glue used to torture them. I would visit a safe house, chatting with gay men and transgender Iraqis who hid for safety, yet at the same time were welcoming and life-affirming, teaching me gay Arabic slang and joking about sex with gay Saddam-look-alikes.

And I would meet other men from different parts of Baghdad, young, fashionable, masculine, with far less to fear, who did in fact cruise along the colorful banks of the Tigris on Abu Nuwaz Street and spend their evenings at fashionable cafés popular among gays in West Baghdad, flirting with men they met through the website Manjam as they sat back in comfortable seats visible from the street.

I would grow to fall in love with a newly vibrant Baghdad. Not that I didn’t still have much to fear as a visiting gay journalist — from conversations that could be tapped to entrapment, spies, and the bullets of panicked Iraqi soldiers. In the end, there was much that didn’t fully makes sense — for me, for the local gay men, and for anyone living in this ancient cradle of civilization, a place somewhere between war and peace.

This four-part series does not aim to duplicate the work of reporters who, over the past four years, exposed the targeted killings of Iraqi gay men. My goal instead is to draw on my experiences in the spaces where gay men socialize, where they have been killed and where they hide, to demystify what remains an abstraction for Western audiences.

Previous Post: « Banksy to Prince Charles: Let’s Grow Some Hemp Together
Next Post: Rob Lowe Strips Down for Men’s Fitness »