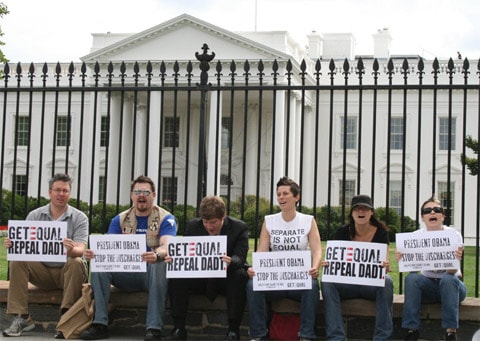 Last Friday I posted about a planned rally outside the White House over DADT sponsored by GetEQUAL, Iraq Veterans Against War and "local DC advocates", according to a press release from GetEQUAL.

Perhaps it was due to the short lead time in which the rally was organized (I only heard about it two hours before it was set to begin) but the turn-out was quite low. There was also little to no documentation of it.

SF Activist Michael Petrelis has a report up now. About 20 people took part in the rally. Petrelis questions GetEQUAL's follow-up:

"Maybe GetEQUAL leaders will take some time, provide their own report back to the community on the protest on their web sites, and also give us an explanation as to how another small-in-attendance event is moving the gay agenda at the federal level."

He also provides a quote from Geoff Millard of Iraqi Veterans Against the War (IVAW) and the above photo. Says Millard, in part:

"As for the protest there were a hand full of us, maybe 20 max, although most of the veterans from Service Members United did not want to be photographed with IVAW, so they kept their distance. We held signs, chanted, and did the regular for a protest that was very much in the spirit of reaction and excitement about the chance for an end to DADT. Serving openly is a step towards equality that crosses many lines. Get Equal has no position on the wars, while IVAW has no position on ENDA but we do agree that DADT is discrimination to both of our constituencies and when these issues over lap there is no reason why we cannot work together for a common good."