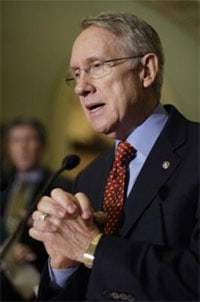 Reid’s spokesman, reiterating statements he made last month, told The Advocate the defense authorization bill stood a chance of being addressed upon lawmakers’ return next week.

“It’s on the list of things we would like to do in the next few weeks,” said Jim Manley.

But it remains to be seen whether Republicans will continue to obstruct the bill and, if they do, whether Democrats have the grit to force the vote through, in which case they will have to produce 60 votes to end debate (reach “cloture”) in order to get the bill to the Senate floor, where it will require 51 votes to pass.

As you may recall, John McCain was busy obstructing the bill and any scheduling of it before his primary.

“Now that [McCain’s] primary is over,” Manley said, “hopefully he will allow us to go to the bill.” McCain’s office declined to comment for this article.

But Sarvis said hope may not be enough in this case and called continuing to accommodate Republicans “a prescription for failure.” He’s looking for Majority Leader Reid to file a cloture petition if Democrats cannot find common ground with the GOP on taking a vote.

“We reached a point where we can’t sit on sidelines and let the opposition continue to object — the critical hour is here,” Sarvis said, adding that he believes Reid will keep his commitment to bring the legislation to the floor.

But if Sarvis does not see such a commitment soon, he said, SLDN will take the fight to Reid’s home turf in order to lobby for action.

So where do things stand as of this morning?

WILL THEY OR WON’T THEY? – The chances that the Senate will take up the National Defense Authorization Act before the next recess are declining by the minute; “contingency planning” is now the operative phrase. Defense industry and lobbying sources are scrambling to prepare for any number of possible courses of action that are dependent on congressional leadership, and, to some extent, election poll results.

WHAT ARE THE ODDS? – One Senate staffer’s bet: “Seventy percent is pretty good odds for the Senate to do anything, the staffer tells Morning Defense.

"McCain spokeswoman Brooke Buchanan says the senator has not backed away from his objection to bringing the defense authorization bill to the floor."