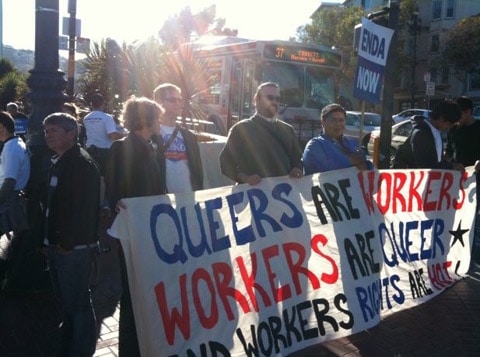 Activist groups GetEQUAL, One Struggle One Fight, and Pride at Work targeted Nancy Pelosi late this afternoon on ENDA in San Francisco. Photos are coming in. From a press release the group sent out:

Today, GetEQUAL, a national, direct action lesbian, gay, bisexual and transgender (LGBT) civil rights organization; One Struggle One Fight, an LGBT and allied civil disobedience organization; and Pride at Work, an officially-recognized, LGBT constituency group of the AFL-CIO, first rallied at Harvey Milk Plaza and then proceeded to shut-down Market and Castro Street in House Speaker Nancy Pelosi’s home district of San Francisco. The act of non-violent, civil disobedience was the second protest this week targeting House Democratic Leaders to make good on their promise to pass the Employment Non-Discrimination Act (ENDA) that would protect LGBT workers from discriminatory employment practices. Lesbian, gay, and bisexual employees can be fired from their jobs in 29 states, and transgender or gender-nonconforming employees can be fired in 38 states.

At 5:00 pm (PST) a group of LGBT and allied advocates gathered in the historic Harvey Milk Plaza to remind Speaker Pelosi that they are making good on her July 24, 2010, speech at Netroots Nation, telling progressive activists that she wanted to pass ENDA but asked them to “build the mass to make me do it.” At 5:30 pm (PST), after the rally, advocates marched from Harvey Milk Plaza to the corner of Market and Castro Street – in the heart of Speaker Pelosi’s San Francisco Congressional District – where they unfurled a banner across the street, blocking traffic, that read, “Pelosi: When Jobs are Lost, the Market Stops.”

At this posting the traffic blocking was beginning, according to Twitter posts. More as it develops… 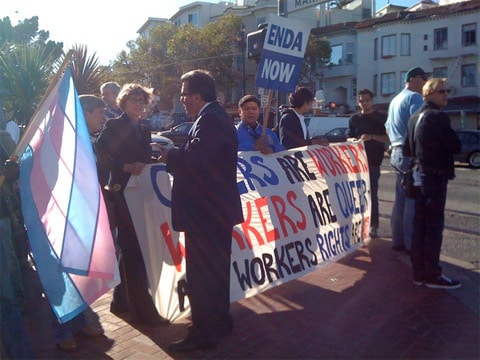