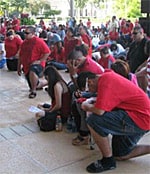 "The nonprofit group reported spending $125,695 on lobbying last year, a huge jump over the zero dollars it said it spent on lobbying in 2008. The change comes after at least two complaints were filed with the Internal Revenue Service about the forum's extensive political activities. 'This tax form just confirms what we had suspected, and that is that they engaged in excessive lobbying, that they have no charitable programs, that they are 100 percent a lobbying organization,' said Holly Huber, who filed a complaint with the IRS in June on behalf of Hawaii Citizens for the Separation of State and Church. 'They should not be a tax-exempt nonprofit charitable organization. They are a political action group.' Francis Oda, president of Hawaii Family Forum, and James Hochberg, an attorney for the nonprofit, did not return calls yesterday afternoon for comment on the tax return."