Mary McAleese, the President of Ireland, has said no to an invitation to be grand marshal of New York City's St. Patrick's Day parade because it continues to discriminate against gay people, the Irish Times reports: 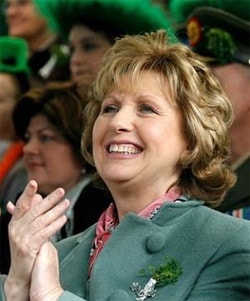 "The turn down is said to be connected to the issue of gays being refused the right to march in the parade under their own banners, and McAleese’s strong relationship with gay and lesbian organizations in Ireland. As she will also be in the last year of her term in 2011, officials in the president’s office were reluctant to become embroiled in a major controversy about her taking part in the parade which has excluded gay organizations for over 20 years…McAleese’s refusal to accept the grand marshal invite will come as major blow to parade officials who were intent on making the day an historic showcase. New York Archbishop Timothy Dolan of New York is now being considered a likely replacement. Despite a reputation as a conservative Catholic when she took office, McAleese has become a firm advocate for marginalized groups in Irish societies including gay groups. She is very popular with such groups and was risking putting one of the signature accomplishments of her presidency at risk if she accepted the New York invite to lead the parade."