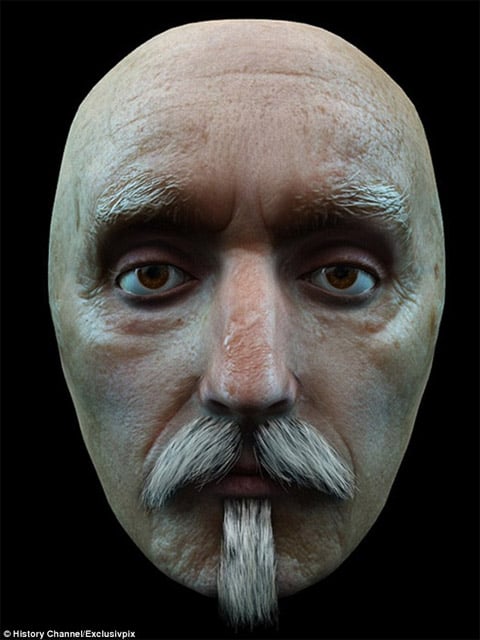 Directors of a new UK documentary airing this month called Death Masks, which creates 3-D images of famous figures using scans made of death masks and during life says you're looking at The Bard.

Others disagree: "The Bard's true likeness has been the subject of speculation for centuries and many experts dispute that the death mask used in the programme is Shakespeare's. It was found in Darmstadt, Germany, in the 1840s and German scientists linked it to Shakespeare after carrying out a series of tests. They say it proves the writer suffered from cancer towards the end of his life. Forensic anthropologist Dr Caroline Wilkinson insisted there were 'a large number of consistencies' between the 3D image and portraits of the writer. Shakespeare Birthplace Trust chairman Stanley Welles rejects the validity of the new image and the death mask, adding: 'Shakespeare was not a national figure at the time, not in the way he is today, and it is unlikely a mask like this would have been made.'"

The filmmakers also presented images of Napoleon and George Washington.