As expected, the Justice Department late today filed an objection to the injunction requested by lawyers for the Log Cabin Republicans last week following a judge's declaration earlier this month that the law is unconstitutional. 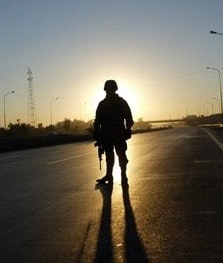 The Advocate reports that the main points seem to be:

"'[A]ny injunction in this case must be limited to plaintiff LCR and the claims it asserts on behalf of its members – and cannot extend to non-parties – plaintiff’s requested world-wide injunction of the statute fails as a threshold matter,' assistant U.S. attorney Paul Freeborne wrote. Freeborne also argued that an injunction would preclude the government both from litigating other legal challenges to DADT or considering the terms of a stay barring discharges of gay and lesbian servicemembers."

"Today, the Department of Justice made a filing in a legal challenge to the Don’t Ask, Don’t tell (DADT) policy, as it traditionally does when acts of Congress are challenged.  This filing in no way diminishes the President’s firm commitment to achieve a legislative repeal of DADT – indeed, it clearly shows why Congress must act to end this misguided policy.   The President was disappointed earlier this week when a majority of the Senate was willing to proceed with National Defense Authorization Act, but political posturing created a 60 vote threshold.  The President spoke out against DADT in his first State of the Union Address, and the Secretary of Defense and the Chairman of the Joint Chiefs have both testified in support of repeal.   And the Department of Defense continues to work on a plan on how to implement repeal.  The President, along with his Administration, will continue to work with the Senate Leadership to achieve a legislative repeal of DADT as outlined in the NDAA this fall."

It remains to be seen whether the Justice Dept. will appeal the ruling.

Here's the filing, (via Americablog):