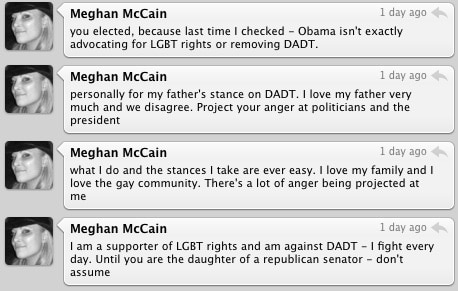 Meghan McCain broke her silence on "Don't Ask, Don't Tell" and her father's role as the most forceful advocate against repeal.

"I am a supporter of LGBT rights and am against DADT – I fight every day. Until you are the daughter of a republican senator – don't assume what I do and the stances I take are ever easy. I love my family and I love the gay community. There's a lot of anger being projected at me personally for my father's stance on DADT. I love my father very much and we disagree. Project your anger at politicians and the president you elected, because last time I checked – Obama isn't exactly advocating for LGBT rights or removing DADT."

Previous Post: « Kelly McGillis and Partner Get Civil Union-ized
Next Post: Scalia: Constitution Does Not Outlaw Bias Over Sexual Orientation »