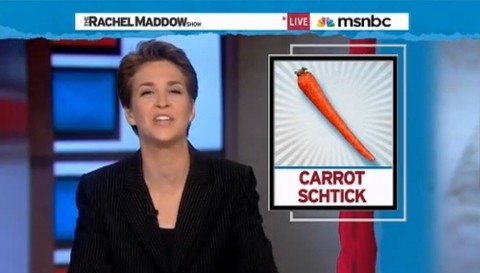 It's tempting to claim that the culture wars only involve bold-faced, controversial subjects like sexuality or gender identity. Such a position, however, ignores the many ways conservative policy players influence the impressionable public.

As MSNBC's ever-astute Rachel Maddow highlighted last night, culture wars comes in different shapes and sizes, especially when it has to do with healthy food or soda.

With the First Lady embarking on yet another crusade for healthy living — and eating — in America, right wing leaders like Glenn Beck and Rush Limbaugh are lining up to knock her down.

"Get your damn hands off my fries, lady," said Beck on his Fox News show. "If I want to be a fat, fat, fatty and shovel french fries all day long, that is my choice — but, oh, not so fast anymore, because now we have the new fact… We have government health care now." Maddow points out that Beck and his ideological peers are trying to create the illusion that Mrs. Obama will be policing the American people's kitchens.

As irrational as this fear may sound to — you know, most people, Maddow's right on the money when she says, "If you want culture war politics again, if you want pure 'us versus them' that is unsullied by actual policy, this is rich territory for the right."

Watch Maddow's analysis, AFTER THE JUMP…