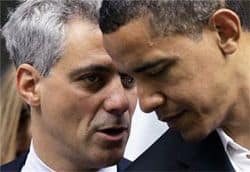 The rumor mill has been on overdrive dealing with reports that White Chief of Staff Rahm Emanuel will leave the administration to run for mayor in Chicago.

Well, those rumors may finally be put to rest, for sources inside the White House confirm Emanuel will make the announcement tomorrow, and then fly back to Chicago to begin a "listening tour" that will provide the foundation for his mayoral campaign.

Emanuel's a key player in all negotiations involving the White House, and has been accused in the past of trading gay rights for political expediency, accusations that already have gay voters promising he won't win in Chi-Town.

Obama advisor Pete Rouse will reportedly take over Rahm's duties until a more permanent replacement can be installed.