The Westboro Baptist Church's Shirley Phelps-Roper is speaking out about Pastor Terry Jones and his plans to burn Qurans on 9/11. She's angry, but not for the reasons everyone else is: 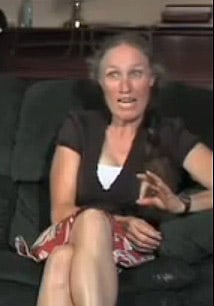 Her irritation Wednesday was not that the Rev. Terry Jones and his Dove World Outreach Center's planned bonfire would offend Muslims worldwide and probably increase the danger to American soldiers in Afghanistan and Iraq.

It's that in 2008 she and her father's Topeka flock set fire to a Quran in plain view on a Washington, D.C., street and nobody seemed to care.

"We did it a long time before this guy," Phelps-Roper said by telephone from a street corner in downtown Chicago, scene of the latest Westboro picket — against Jews this time, not gays.

The difference could be that in 2008 many news media outlets had decided to ignore the group's routine of spewing hatred at funerals of fallen American soldiers.

So when Fred Phelps, calling Muhammad a "pedophilic gigolo," went online and invited people to attend the burning, most stayed away.

Wonder if she's going to be bridesmaid at the wedding?